On February 20-24, 2018, LICA members from across the country met in Charleston, SC for the 2018 National LICA Winter Convention. In addition to working on the business of the Association, members made some great memories during the Associate’s Night’s “Golf” theme, honored some outstanding LICA members, and learned a thing or two to improve their businesses. Mont Gilbert, Missouri LICA, was named Contractor of the Year; Chris Brauer, Missouri LICA, was elected Region IV Vice President, Nordis Estrem, Minnesota LICA, was elected National LICA Vice President; Donna Clark, Indiana LICA was honored as Contractors Wife of the year; Indiana LICA received the Kemp Award in recognition of their legislative efforts and the National LICA Chapter of the Year; and CNA presented it’s Golden Helmet to Dirk Riniker, Kansas LICA, for his outstanding safety standards. Below are some pictures of the fun! 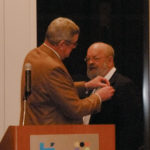 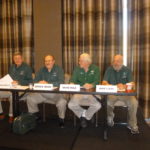 The National Executive Committee gets down to work Indiana LICA accepts the Kemp Award for its legislative efforts 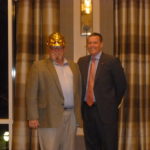 Mont Gilbert, Missouri LICA, is awarded the Contractor of the Year Indiana LICA is recognized as the Chapter of the Year Chris Wagner, NJ LICA, and Bruce Mosier, Prins Insurance, get into the “swing” of things! Steve Gerten, OH LICA, at the podium with the Stooges Mont Gilbert receives the Contractor of the Year Award